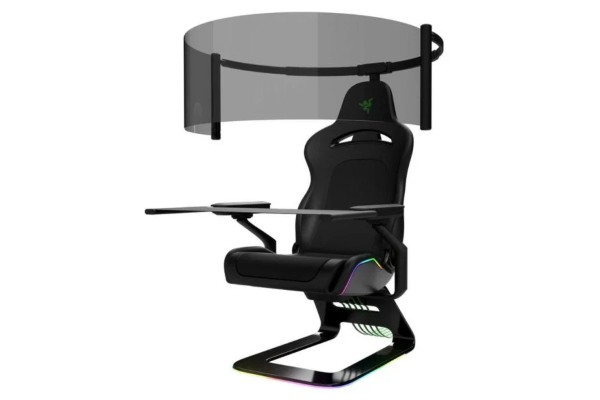 As this year's event is held virtually, this computer brand presented a very interesting gaming concept chair, called Project Brooklyn, designed as a very diverse unit of different forms, fully tailored to the wishes of users.

The most prominent feature of this chair is its flexible display that can be folded inside its brackets when not in use. Adjustable transparent OLED screen in a curve of 180 degrees, can be raised up and to the side or completely pulled out of its position to surround the player and the chair. The fully extended display has sixty inches in diameter and is claimed to possess stunning visual detail and quality.

Just like the monitor, the table that comes with the new armchair can be pulled to one side and fully folded when not needed. This hidden table looks similar to some collapsible models seen in luxury cars. It can extend from the armrest and form a one-piece platform in the middle. Razer called this table "transformable 4D armrests" and it serves as a continuation of the flexible ergonomic sequence.

Project Brookyn gaming armchair is also equipped with a number of other details offering a superior experience to its users. The ergonomically shaped leather chair, with its adjustment system and outstanding design, also comes with Razer HyperSense modules, in charge of providing heptic vibrations, and in addition, the concept has included Razer Chroma RGB lighting.

The only thing missing is the function of the massager, which is certainly a great addition to the energy-based designer chairs intended for multi-hour gaming sessions. “Project Brooklyn represents an exciting conceptual development of an essential and fully active gaming station,” said Min Liang Tan, CEO of Razer.

"Active applications, visual impression and overall functional design, with high attention paid to the proper maintenance of the constitution while sitting, will provide a unique gaming experience," the director added. The Razer Project Brooklyn armchair is currently coming as a concept release, so it’s unnatural to expect its product line in identical form, although some of its features will certainly be commercially marketed in the not-so-distant future.