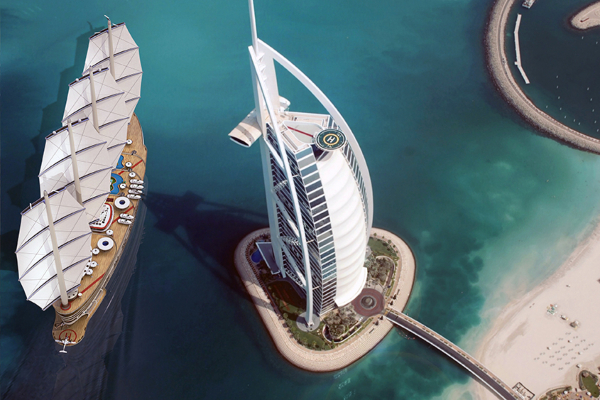 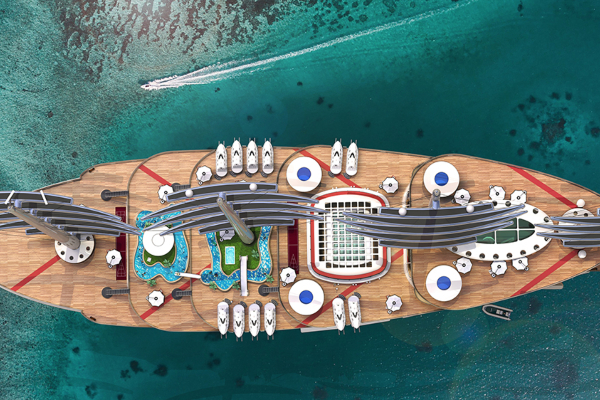 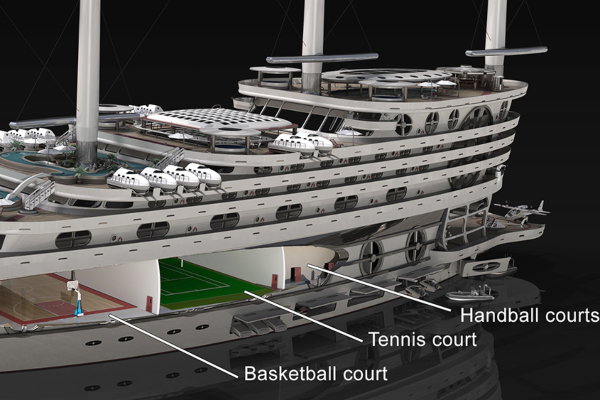 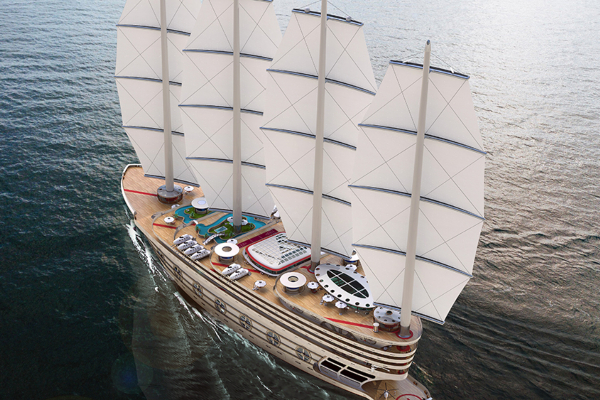 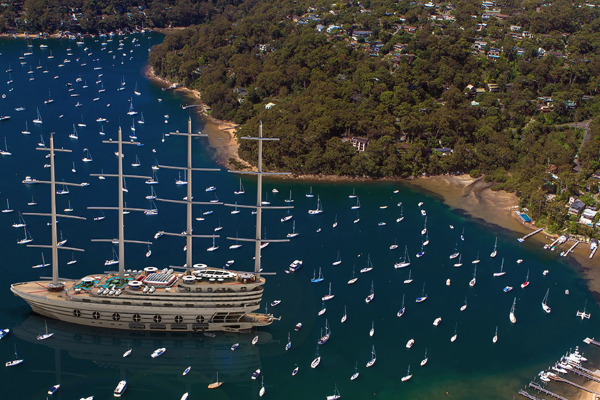 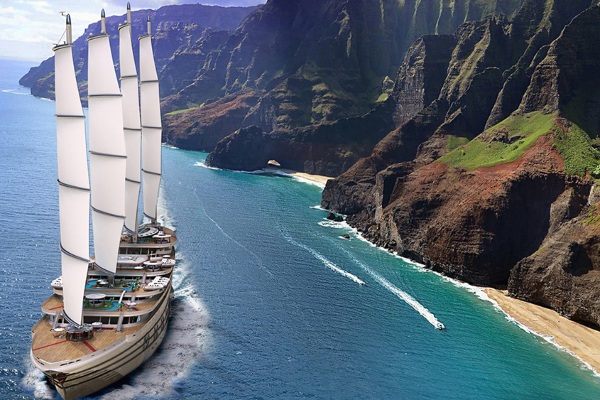 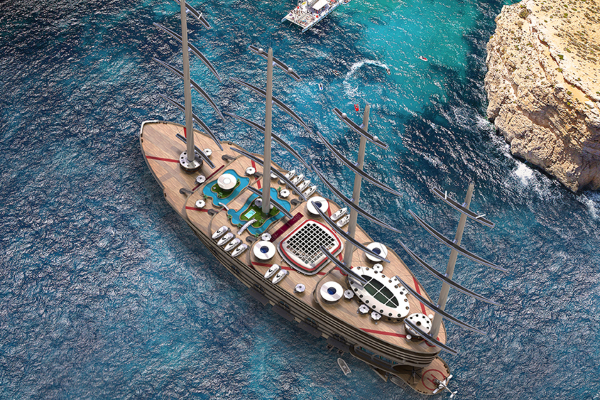 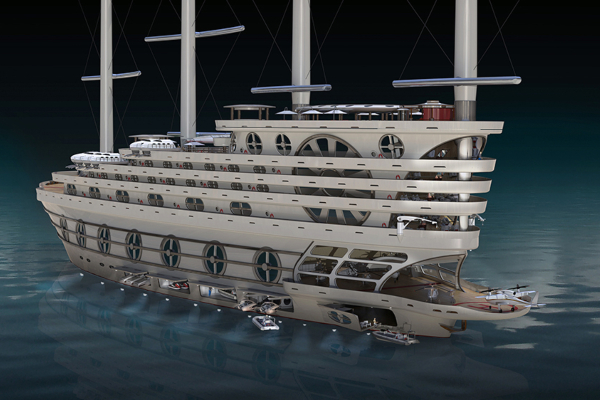 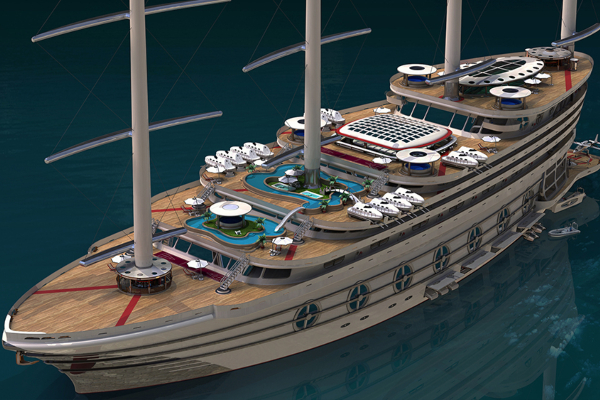 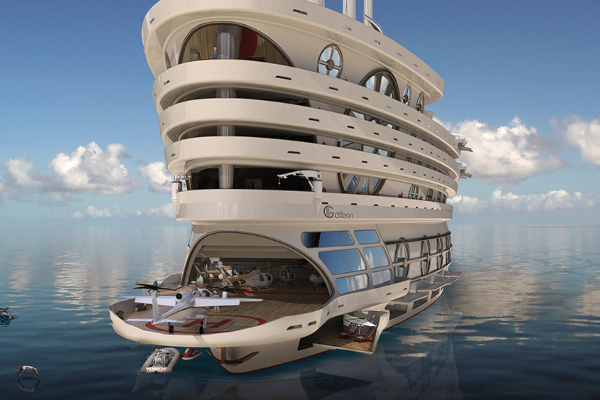 The famous designer has just presented a new gigayacht concept inspired by multi-deck galleons from ancient times, but equipped with an abundance of modern amenities, which can compete with an amusement parks.

The galleons, originally used as warships by European powers of the fifteenth century, are typically comprised of three or more decks and sails, creating a presence that truly evokes a sense of awe. Kozloff's 160-meter-long concept, aptly named Galleon, goes a step further with incredible eight decks and four huge masts, which together give the ship more than enough space to compete with ocean cruisers.

The Galleon is also much stronger than its wooden predecessor - the ship was given an ice-class steel hull, with an aluminum superstructure, which gives it incredible abilities. Also, this ship is far more versatile, because it can play the role of a luxury cruiser with enough space for up to 200 guests, a private residential ship with 20 luxury apartments or a private gigaacht for one person.

The magnificent interior is quite customizable, and as Kozloff says, it can be filled with cafes, bars, restaurants and even parks. The main detail is the indoor sports center, which consists of a full-size basketball court, a tennis court and four handball courts.

The exterior of the Galleon is no less good as well, the upper deck contains a seating area, a full bar and an oversized pool. On one level below, the deck with the bridge offers another indoor pool. According to Kozloff, both pools will have an automatic cover, which turns them into additional space when not in use. The upper deck also has two river pools, connected by a water slide.

The galleon is equipped with four garages, full width, which can accommodate six speedboats, four submarines, six tenders and twenty-one water toy. Of course, the yacht offers enough space for all your extra toys and off-road vehicles.

On top of all that, the ship has a completely closed hangar of 450 square meters, which offers enough space for up to ten helicopters, with space for their maintenance. There is also additional landing space for guest helicopters.

When it comes to propulsion, the Kozloff envisages a powertrain with five diesel-electric motors that would work together to generate 10,000 horsepower. The ship is equipped with four DynaRigs, which create a sail area of ​​10,500 square meters and complement the propulsion with wind power. It is believed that the ship would have a maximum speed of 19 knots, and that in theory it could cross 10,000 nautical miles, at a leisurely speed of 10 knots. Kozloff also added that the Galleon can be a hybrid or a completely electric ship.

"I wanted to encourage the ship building industry to be greener. Of course, this yacht can have all types of hybrid and battery propulsion, combined with the power of the sail”.

Well, this is truly the galleon of the twenty-first century!