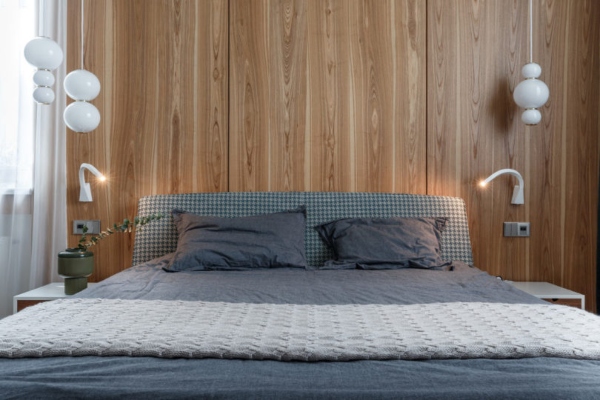 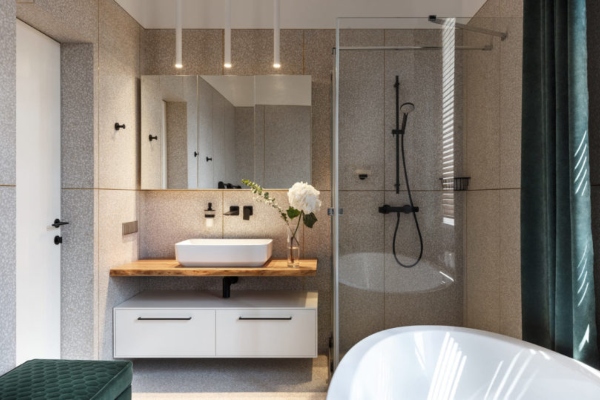 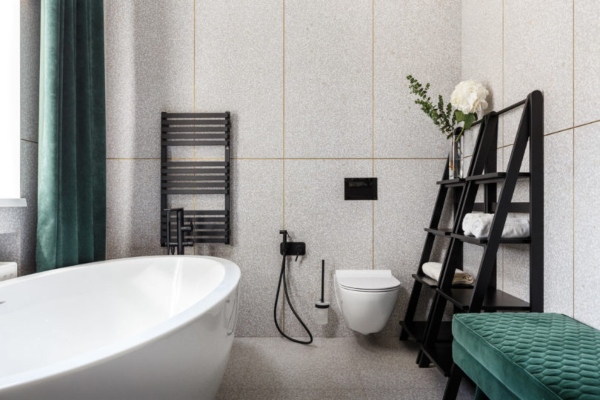 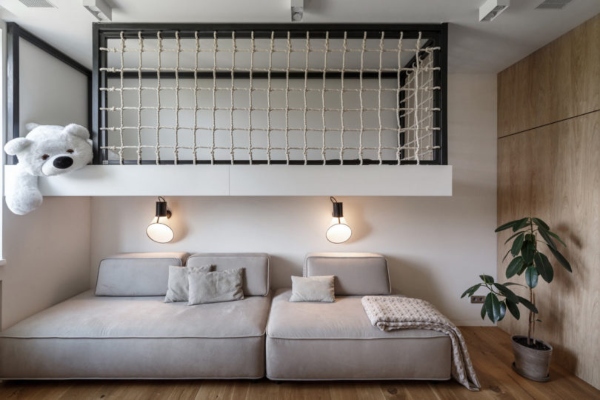 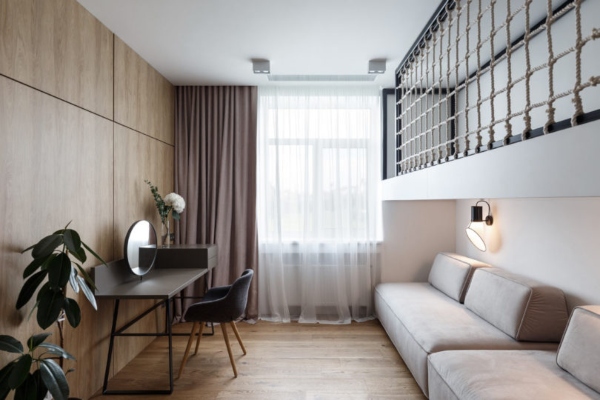 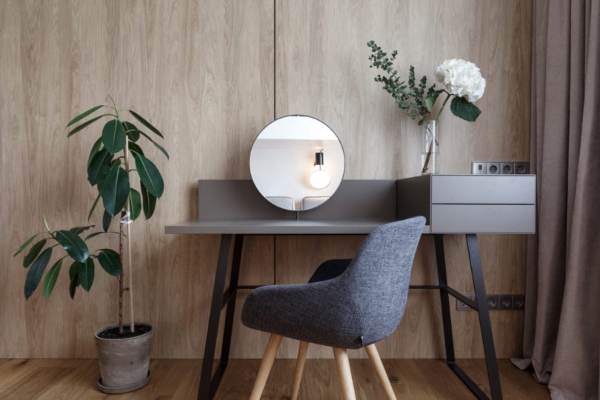 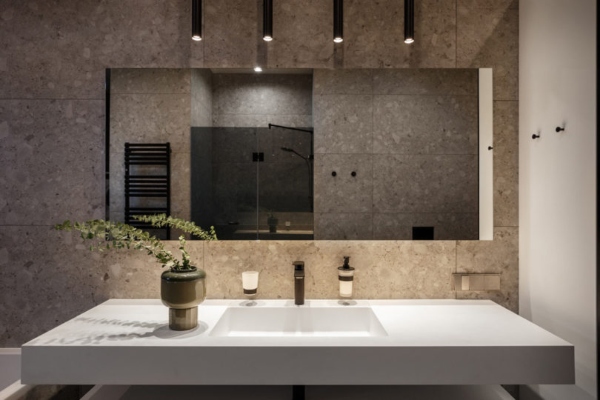 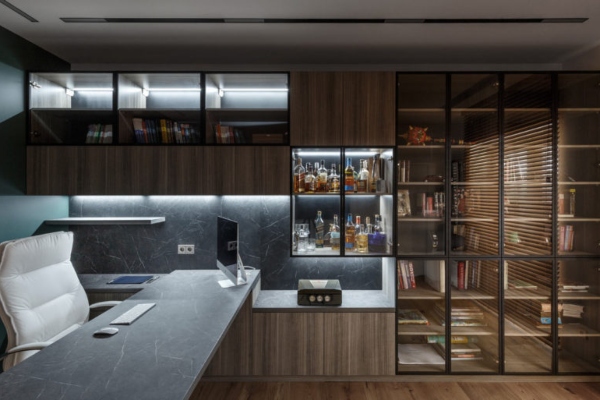 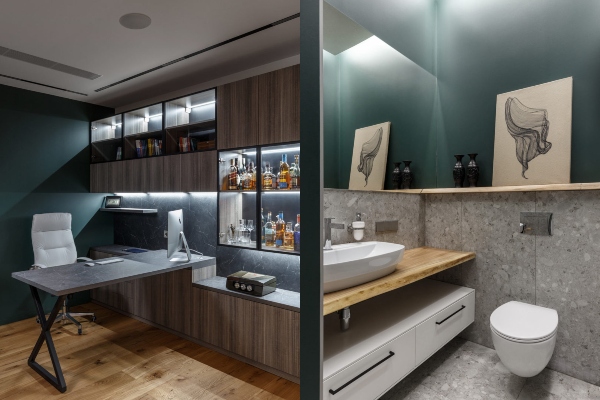 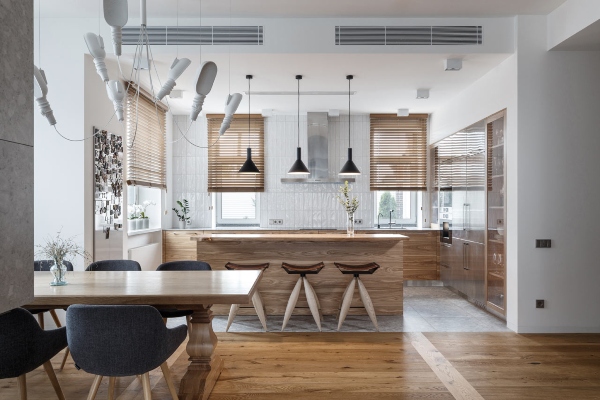 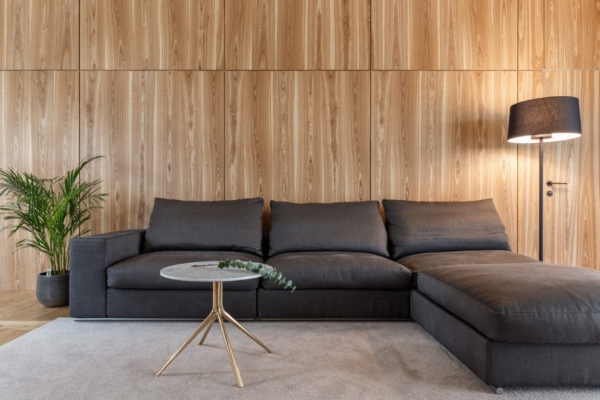 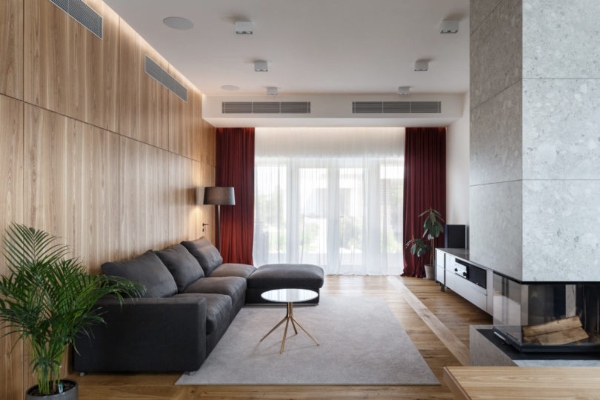 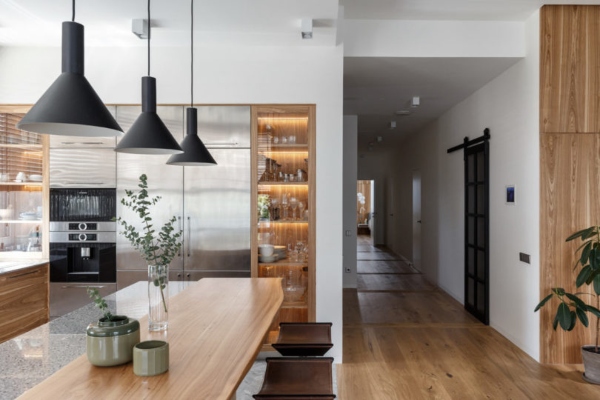 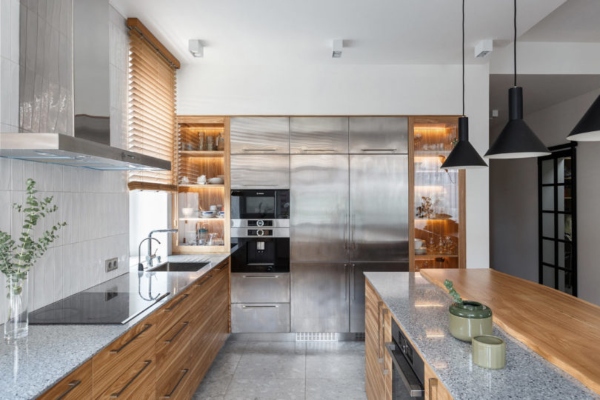 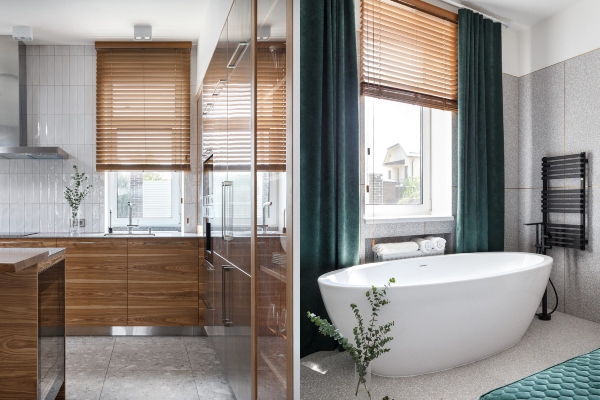 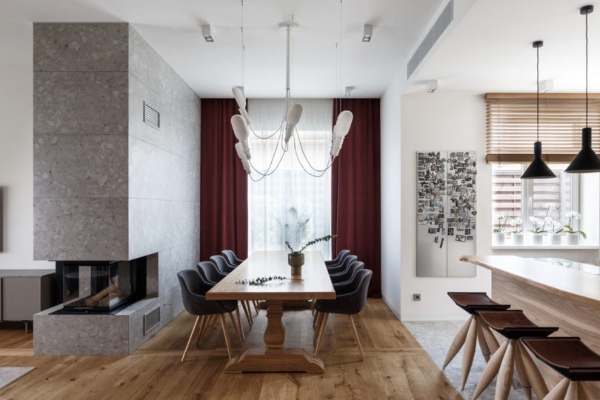 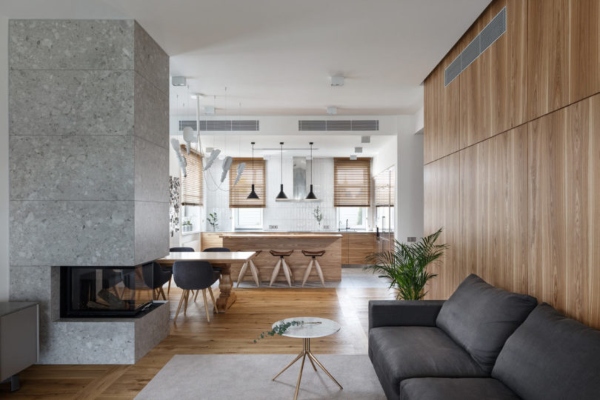 Project named Step Up House, has begun its life as two separate units, which were later merged in order to create more space for a young family in Dnieper in Ukraine…

Designed by SVOYA studio, the interior which measures a little over 200 square meters has been redesigned in order to achieve separate spaces for private and public parts. Social spaces are open and they combine worm wood, white surfaces and neutral tones, which make it fresh and timeless.

Three-sided fireplace is located between the living room, kitchen and dining room and it can be enjoyed from all three sides. A hallway leads you towards a nook which is dedicated to kids, and it contains a bedroom, bathroom, playroom and master bedroom.

The playroom contains a netted game space which floats above the modular sofa, which maximally uses each square inch of space. The hidden door in the living room will lead you to the home office, where you’ll see a desk with an abundance of storage.

Sneak into the ambiance of impeccable luxury

If Rome ever had a royal league, it was the Borgheses...

A penthouse with an oval office

Many people around the world have closely followed the presidential election in the United States, but it seems that Joe Biden will not be the only one with the Oval Office…

Would you like a penthouse which comes with its own Aston Martin?

The Manhattan residential project, signed by Sir David Adjaye, is still getting its final details, but the motivation to buy is already at a high level…

Pink living - step inside a magnificent apartment in Madrid

If you have ever wanted to know what life in the Barbie world would look like, we suggest you take a peek at this unique home in Madrid…

Transforming Your Home for a Cosy Winter

With the winter holiday season coming up, it’s now time to gear up for the cold weather and keep yourself cosy in the comfort of your own home.

50 million dollars penthouse which comes with an Aston Martin Vulcan

A minimalist white penthouse in Spain

The Costa Blanca Penthouse is a minimalist residence located in Spain, created by Fran Silvestre Arquitectos…

After paying $ 1.3 billion in land more than a decade ago, the entrepreneur has finally unveiled the first penthouse in this part of London...

The brand new 1,300 square meters apartment is at the top of the Tiffany & Co boutique…

The elegance of this Scandinavian home with gray walls will make you want to renovate your home...

“Design and interiors have been my passion for a long time,” says Miranda Kerr…

The billion-dollar development project marks a new beginning for Oahu…

The 3 commandments of Scandinavian design

Just like the fashion or tech industries, interior design follows trends that people become fixated on until they’ve immersed themselves in the latest craze.

When designing any interior space, among the first questions you’re going to ask yourself is: what colour would I like it to be? Nowadays, we’ve access to unprecedented colouring o...

Legendary contractors, the Rockefeller Group, a company formed nearly a hundred years ago to develop and build the Rockefeller Center, has recently launched a new forty-five-story...

Let yourself be completely enveloped by nature, take delight in its beauty and for a moment, forget the hustle and bustle of the city.