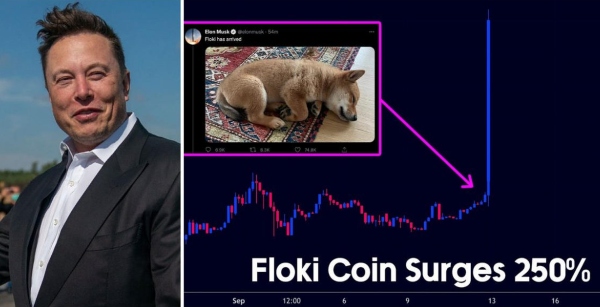 The CEO of Tesla regularly causes big changes in the values ​​of some of the largest crypto currencies in the world, with just one of his Tweets. Something as simple as a broken heart emoticon with a Linkin Park meme resulted in a 4% drop in the value of Bitcoin in June, because the Tweet posted by Elon also had a Bitcoin hashtag. However, the hysteria seems to have reached a new level, when the founder of SpaceX published a picture of his new puppy, which led to an incredible increase in the value of the hitherto unknown crypto currency of as much as 1,000% in the last 24 hours.

Elon shared a photo of Shiba Inu puppy sleeping peacefully on the floor, with the description "Floki has arrived". Fans of the famous billionaire understood that as an obscure message of support for Floki crypto currency. Still, Elon almost regularly posts cryptic tweets and further fuels the crypto currency market, but this is crazy, even by his standards. A crypto currency named Shiba Floki came out as the winner because of this Tweet. According to CoinMarket Cap, the price of Shiba Floki currency jumped by 1,000 percent, while others, such as Floki Coin, Floki Inu and Floki Shiba jumped by 250, 60 and 25%.

If you have been following the crypto currency market and Elon Mask for the past eight months, you are surely aware that the cryptocurrency Dogecoin has become a favorite among investors, after Elon shared a Tweet supporting it. Following the latest post on this social network, Dogecoin's official Twitter account replied: "Mr. Musk, I just want you to know that your doge is shaped somewhat like a small bean. Thanks. That is all".

As it turned out, not everyone is happy with Elon's incredible influence on the crypto market, so many investors are publicly expressing their concerns. A few months ago, a crypto currency called StopElon was launched to stop irresponsible market manipulation, but apparently, they did not achieve much.