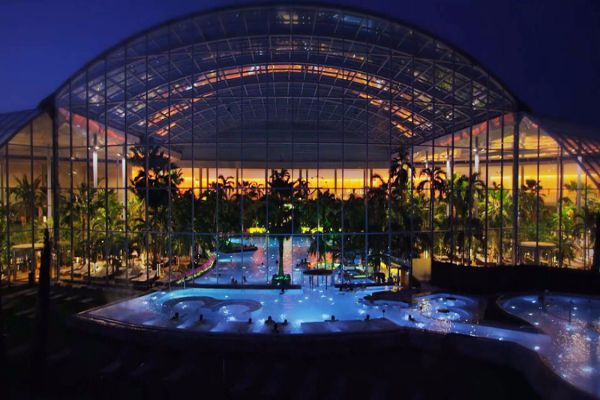 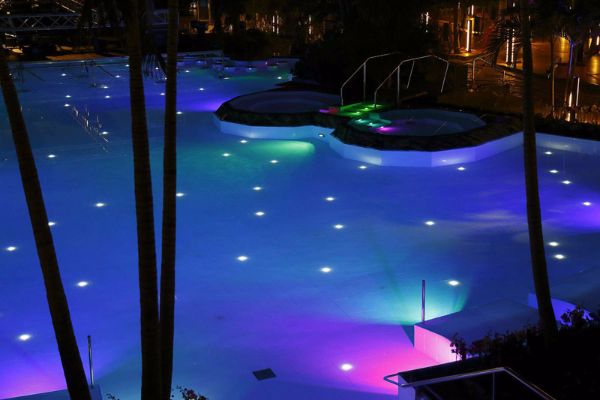 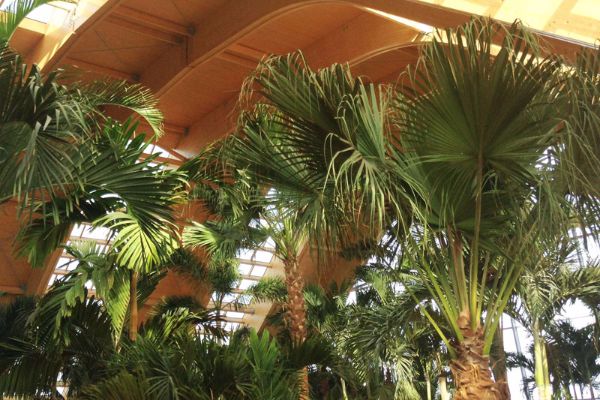 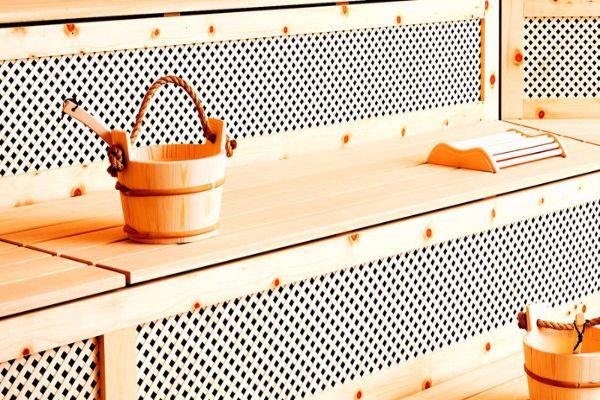 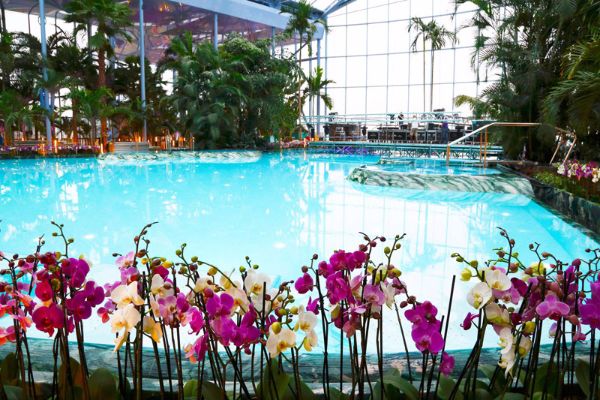 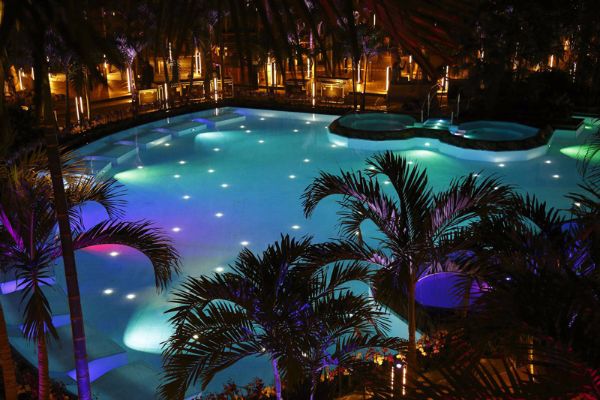 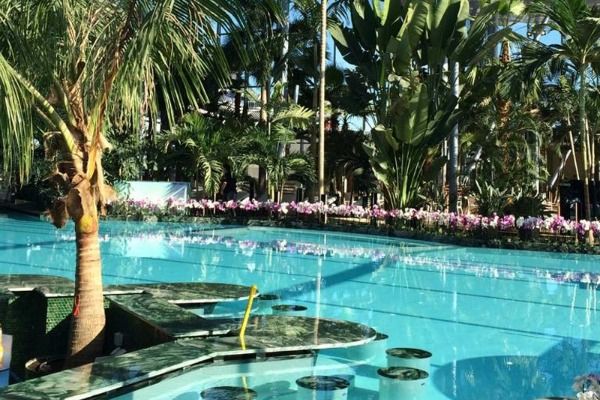 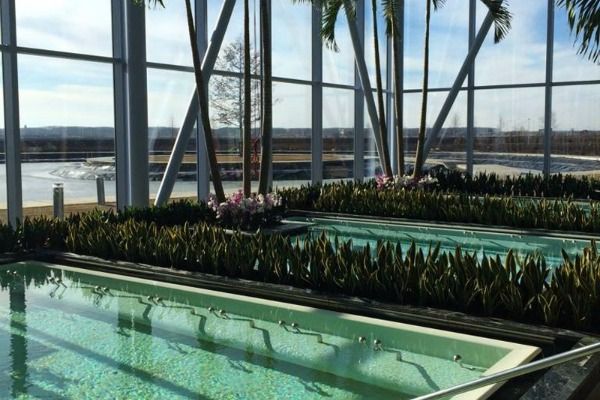 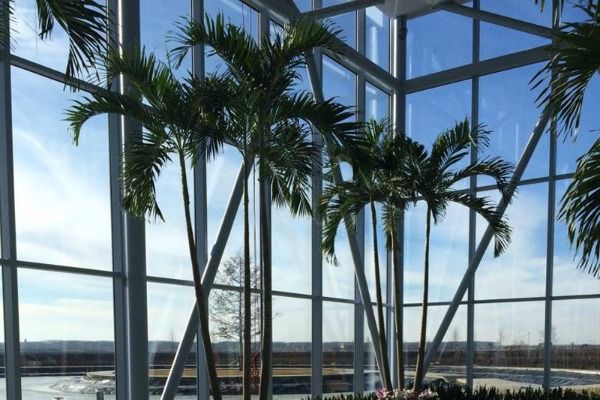 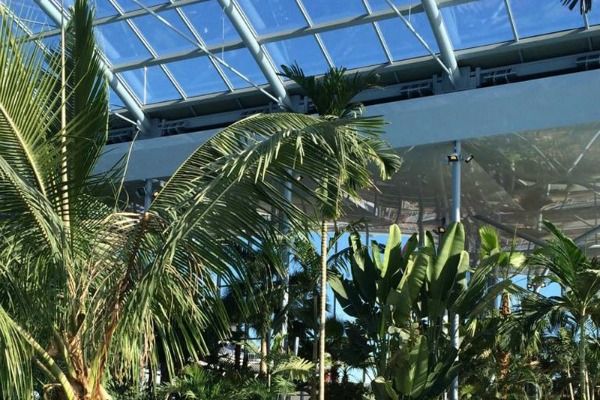 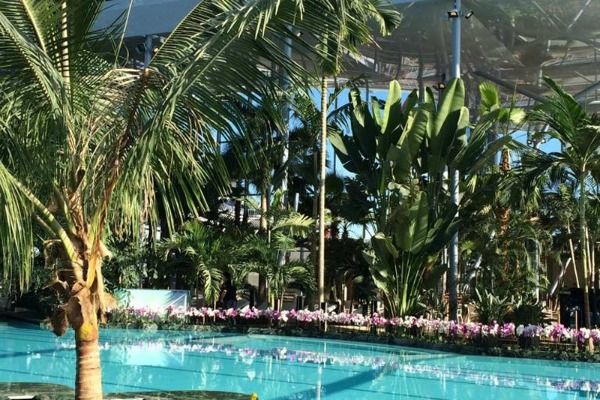 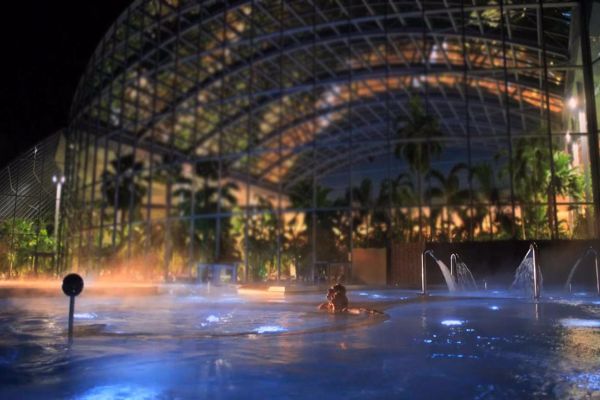 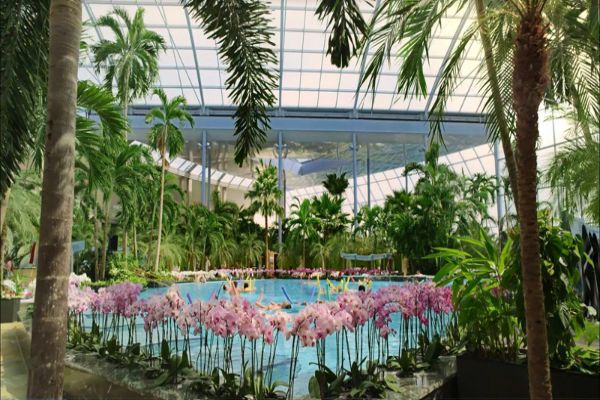 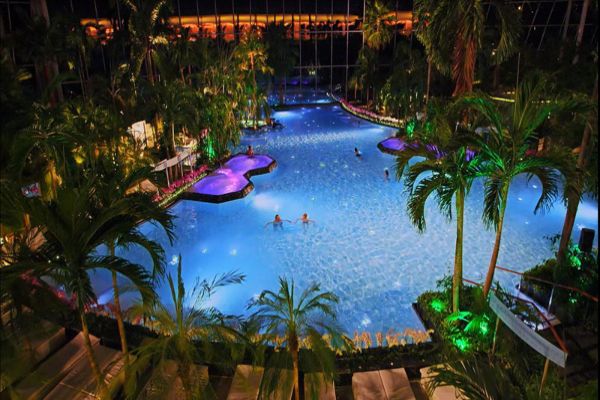 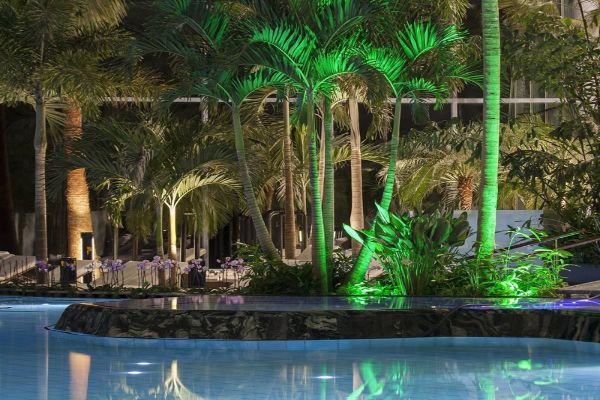 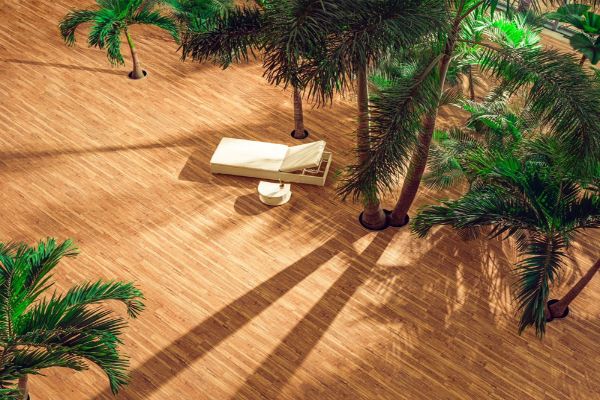 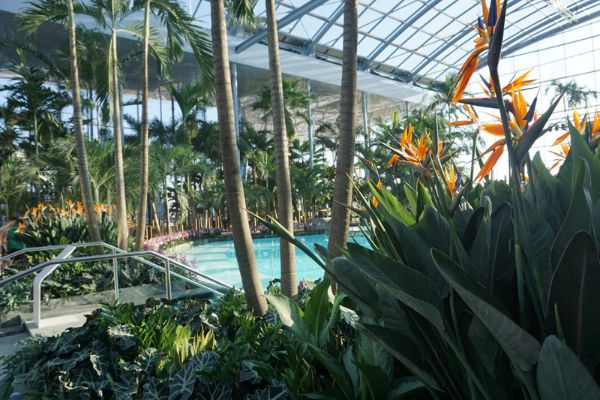 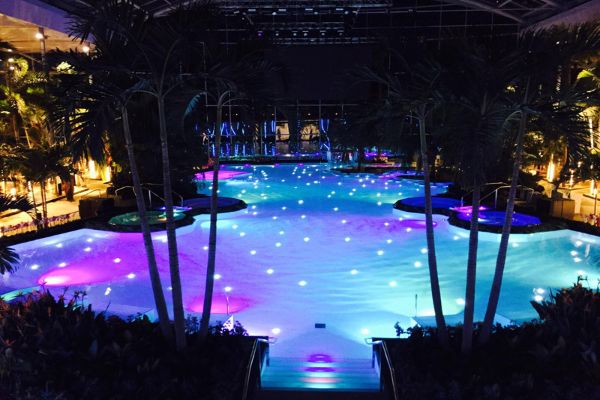 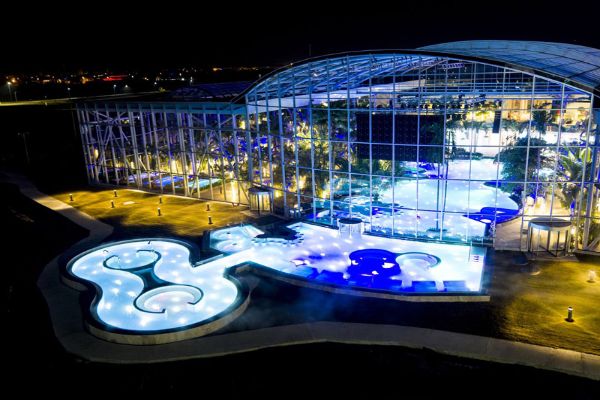 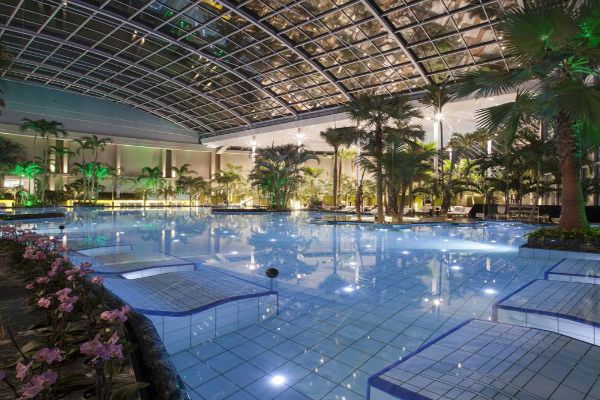 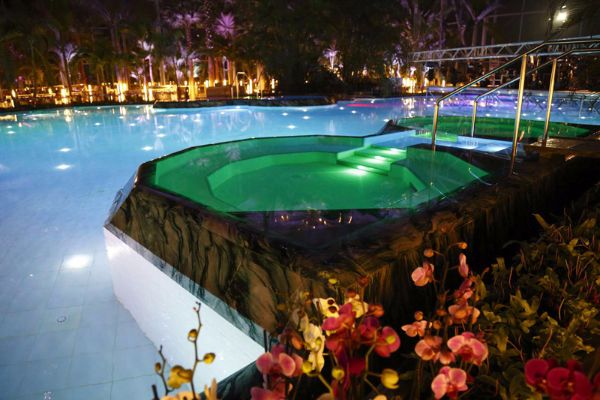 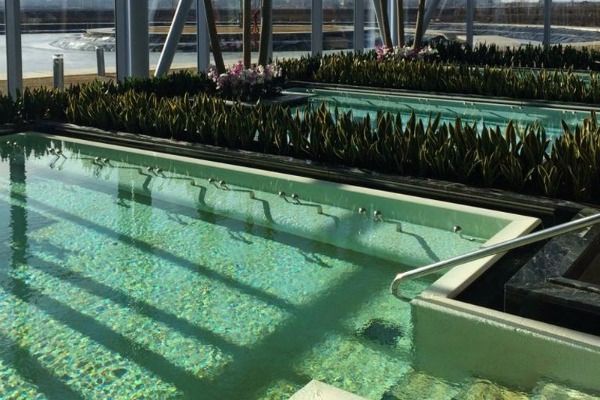 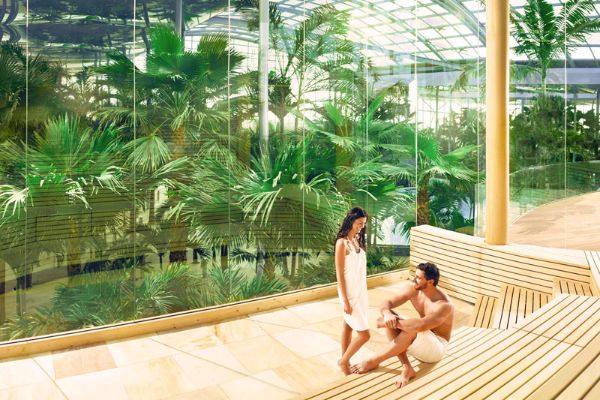 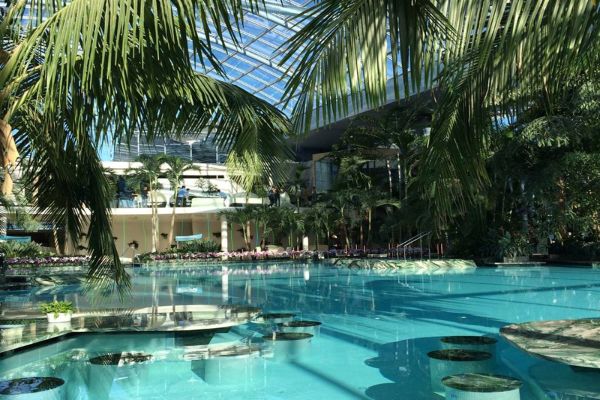 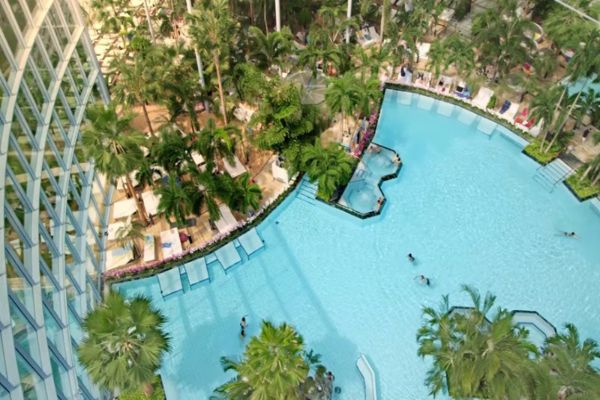 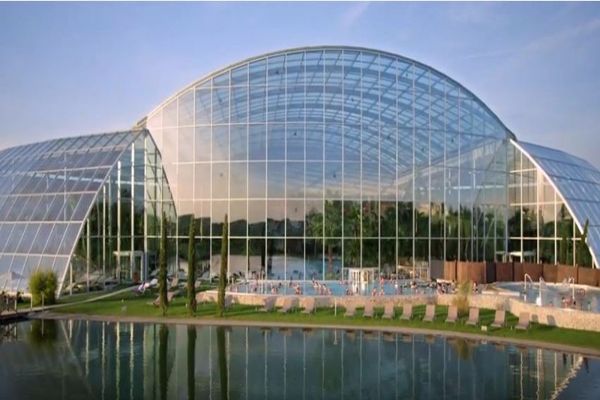 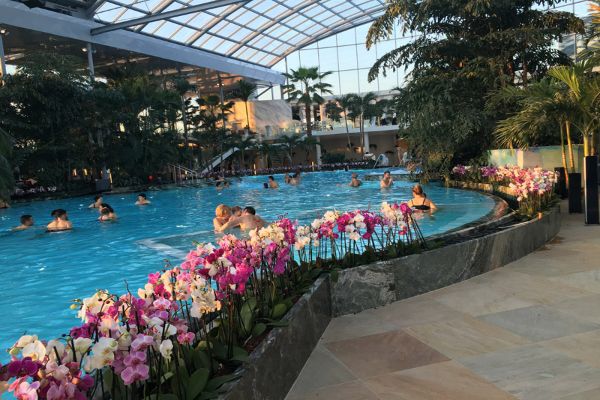 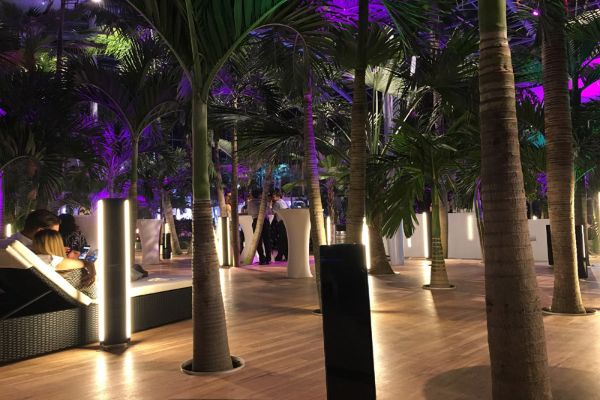 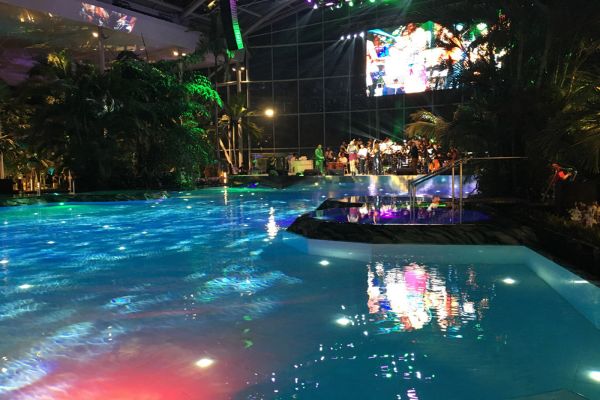 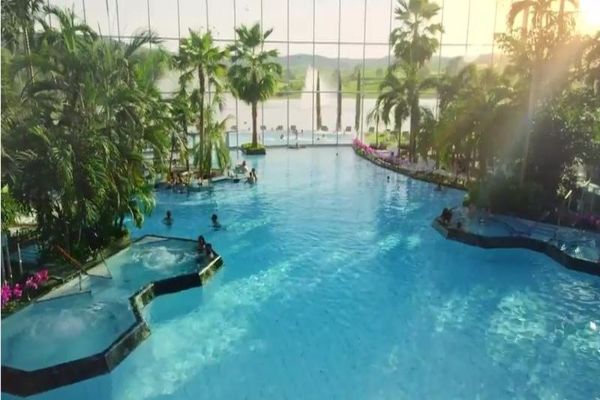 Since January 14th, a new tropical paradise conquered Romania - these are Therme Bucharest, located just ten minutes from the city...

The owners of these Therme, Austrian A-Heat Group, say that this is the largest complex of its kind in Europe. Germany Wunde group, which has four thermal centers in Europe, worked on the development of this project. Apart from its uniqueness, innovation and huge investments, the largest thermal spa in Romania, will be a place where visitors will have the opportunity to witness the setting up of numerous records.

Therme Bucharest, wellness, relaxation and entertainment center with an area of ​​30,000 m2, is based on the thermal waters, which are located 20 km north of Bucharest, in Baloteşti. The main elements of this center are eight of heated swimming pools, where the water temperature is a constant 33 degrees Celsius. Pools of these spas are filled with thermal water, which is coming up from a depth of 3,100 meters. The air temperature is always between 29 and 30 degrees Celsius, and the center will be open 9:30 to 23:30 on weekdays and from 8 am until 1 am during weekends. Bucharest has now got a new special element that will definitely put it on the map, as well as the main tourist attraction of the region. Although the city itself has much to offer, this project will bring it worldwide fame.

Otherwise, this park contains not only swimming pools with thermal water, but also the largest public indoor and outdoor gardens in the country. Garden is composed of more than 800,000 plants and hundreds of species of trees, including the largest plantation of palm trees in Europe. The main attraction of this place is the Tree of Life, which is one of the largest botanical rarities today.

The center is divided into three main sectors; each of them has a specific theme. The Palm, as the name suggests, is dedicated to relaxation in the palm trees, or in Europe's largest garden of this type. Elysium space is designed for thermal sauna, where those who prefer cozy and relaxing massages will especially enjoy. The third sector of the spa center is devoted to partying. There is a wave pool, the largest of its kind in Romania, as well as a large number of water slides. When you get tired of all the activities that the sector offers, in its part is also a bar where you can unwind and relax with a glass of your favorite beverage and a tasty snack.

Constant climate changes, a large number of resorts near the Black Sea and the fact that Romanians as a nation work very much, convinced the Austrian investors that the center of this type is something that will be a real hit. Therefore, the inhabitants of Bucharest will have the opportunity to enjoy the second largest spa town in Europe - Rome is the first on the list of the biggest spa towns, as well as the oldest thermal capital.

Investment in the project will reach about fifty million. Construction of the baths began in 2013, with the initial investment in the amount of 29.64 million Euros. According to the companies working on this project, a ticket to the spa will be the equivalent of a movie ticket, so that it will actually be available to all.

If you ever want to recharge your batteries, rest your body and spirit in a location that is quite unique, we have the right thing for you...

Best Team Sports For Your Body

There are many benefits to playing team sports. For one, it can promote physical fitness and health...

9 ways you can pamper yourself

If you've been working hard the past few weeks, you should definitely pamper yourself…

The new Ritz-Paris spa is inspired by flowers

Reflecting the beauty and healing power of flowers, the remodelled hotel is the epitome of timeless sophistication and elegance.

Dogs are very similar to humans, and the appearance of anxious behavior proves it.

Scandinavian Spa - a hit in the wellness world

Find out why this Scandinavian treatment is incredibly popular in the north of Europe and Canada...

Wellness has become a fascinatingly modern trend over the past few years, and by all accounts, it is a fad that will never bore us…

Opened just a few days ago, Six Senses Kocatas Mansions are located near the Bosporus...

Wellness in the center of attention

Wellness and well-being are nowadays a top priority for many…

Discover luxury and magic on your way to Machu Picchu

Located on the charming hacienda from the seventeenth century, on the way to Machu Picchu, the incredible Aranwa Sacred Valley hotel will impress at first glance...

If you thought you've seen the best that Cancun can offer, Nizuc Resort & Spa will show you that you're wrong...

Relaxation in the right manner

If you belong to a group of people who could not wait to get away from the crowds on the beach and enjoy the peace and quiet, we have the right thing for you...

As an ideal place for rest, peace, privacy, luxury and comfort, appears Shangri-La Resort in Fiji, and in particular its spa corner…

New details about this prestigious and long-awaited spa center finally showed up...

Located near the Saronic Bay in the Athenian Riviera, Arion Resort & Spa offers you the best of Athens and all of Greece...